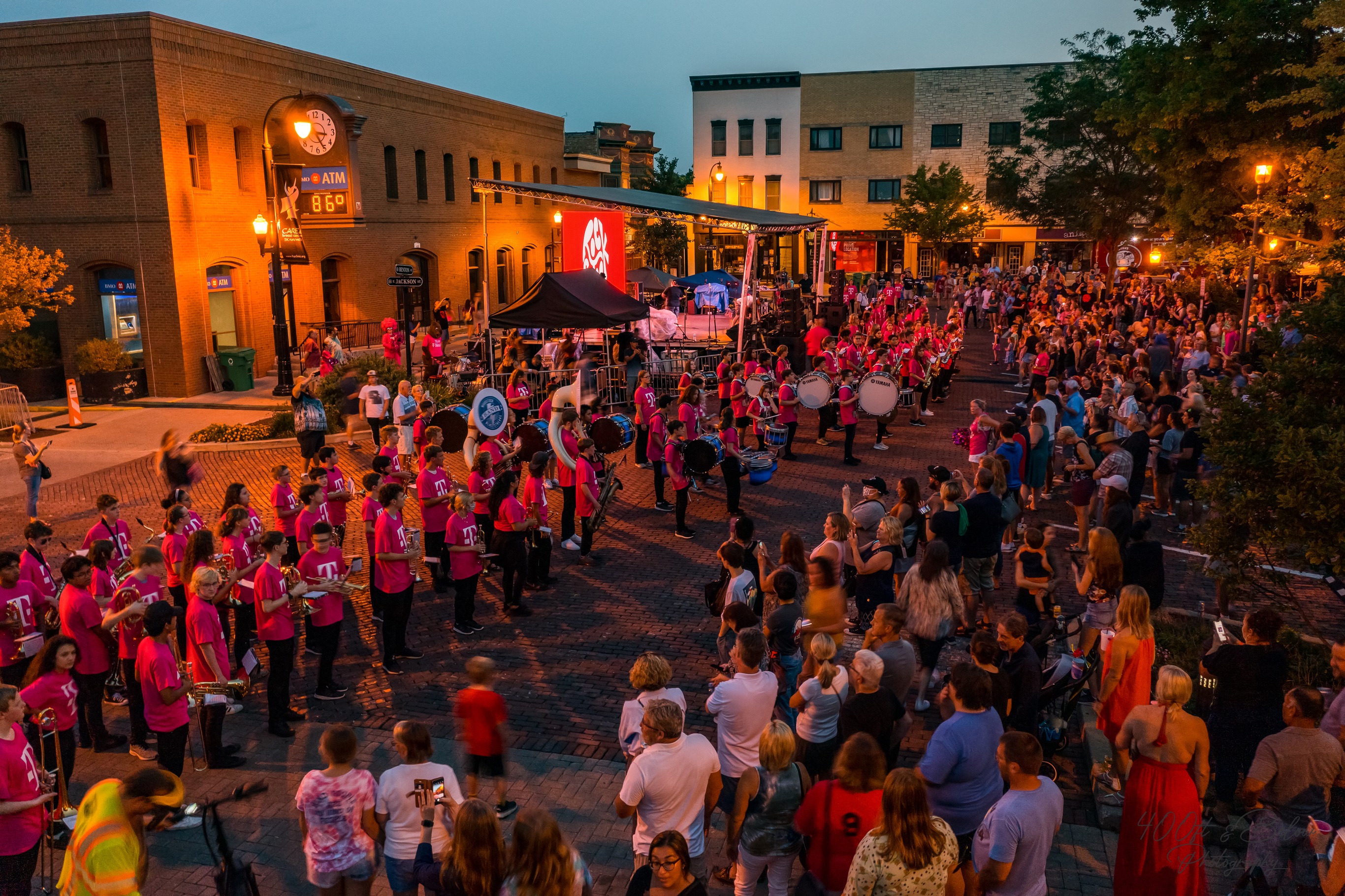 ‘It’s an amazing win,’ said Danielle Gulli, the president of the Woodstock Chamber

By Sam Lounsberry
of the Northwest Herald – Shaw Media

Woodstock was announced as the top winner of $3 million in prizes and investment from T-Mobile on Saturday night as part of the cellphone carrier’s hometown grant contest entered by thousands of other towns.

With the award, announced at the Rockstock concert in downtown Woodstock, T-Mobile will outfit an area of the city, likely its historic Square, with 5G wireless signal infrastructure, provide another $200,000 in grant funding to the city, refurbish a baseball diamond in a city park and put on a show by the Grammy-nominated duo Florida Georgia Line in the spring.

“It’s an amazing win,” said Danielle Gulli, the president of the Woodstock Chamber of Commerce and Real Woodstock, which is a partnership between the Chamber and the city.

Mayor Mike Turner gave Gulli and the Chamber credit for leading the submission of the city’s contest entry.

“Winning the T-Mobile Hometown Techover will have a huge impact for Woodstock. From the 5G tech investment to the T-Mobile community grants and Little League field upgrade, it will be transformational for us,” Turner said. “… Being selected from thousands of entries demonstrates what Woodstock can achieve when we set high goals and are innovative in our efforts.”

Gulli hopes the addition of wireless technology in the Square that will allow devices in the area to start sending data over super-fast 5G transmission technology will be followed up by the city expanding the speedy network with future investment into it throughout more of Woodstock.

She noted the grant-funded work to grow the city’s technological capabilities coincides with design planning and funding allocations for other potential huge infrastructure projects in the city, namely a $57 million widening of Route 47 through the city by the Illinois Department of Transportation that could be started within the next two years, as well as a possible Metra railway expansion further in the future.

“It’s going to be transformational for Woodstock. We have the Route 47 expansion coming. We have the Metra expansion down the road. The piece we were missing is the tech piece,” Gulli said.

The 5G capability is expected to be especially useful for the Woodstock Farmer’s Market as well as other large downtown gatherings like concerts, holiday lightings and more, and prevent slowdowns of wireless networks during busy times, Gulli said.

The winnings also involve the nonprofit Smart Growth America consulting with Woodstock on how to spend the grant funding available through the T-Mobile winnings, Gulli said.

The project will facilitate talks between local schools, the city and the consultants to ensure students and teachers have the connectivity they need for academic success, Also, T-Mobile will be distributing 100 “prize packs” consisting of cellphones and other devices to Woodstock residents, with an emphasis on providing technology to households that are underserved and in need of new technology, Gulli said.

Woodstock, along with nine other towns across America, had already netted $50,000 in grants from T-Mobile for being named top-10 finalists in the company’s inaugural T-Mobile Hometown Techover.

“The chosen town will become the 5G model for communities across the U.S., showcasing the power of the country’s largest, fastest and most reliable 5G network — T-Mobile’s,” the company said in a news release announcing the other finalists last month.

A panel of judges from T-Mobile and Smart Growth America determined the contest’s winner based on project feasibility, the town’s need for a network upgrade, and town leadership interest and engagement.

“We’re so excited that T-Mobile has made a commitment to small and rural cities like Woodstock,” Real Woodstock wrote on its Facebook page Sunday morning. “While we know Woodstock is a great place to live, work and play, we are excited for the world to know.”

A television segment about the T-Mobile contest and Woodstock’s victory is set to air on NBC’s “The Today Show” on Friday, Gulli said.

Photo by 400ft and below for Real Woodstock